Okay, so not all of them were made in Photoshop.  A lot of the older pictures were made in other programs, but...  you get the idea.  I like to edit pet pics, so I'm gonna stick them here.  So marvel at my mad Photoshop skillz, yo!  Or...  laugh at my lack thereof.  x.x  Either way, enjoy!

This was my Halloween sig at Coming Soon.  It features my kitty Hallow.

Disappearing Cheshire cat sig!  This is I think the first real animation I've made.  It was my sig at TPS.

A pic I made to celebrate my first dog champion, Freedom!  In the background are some random lyrics from the song he was named after, The Rebirth by Boy Hits Car.  Some of words are covered up, and part of that was on purpose, cuz I posted this at the PKC forum, and you can't cuss there.  In the first bit, the last line is "come and see ya standing naked" and in the second bit, it's "Let's fuck away morality, You might be independent"  A really kick ass line, I hated to have to cover it up, heh.

Candlelight meets Yummy...  And much shock and confusion ensues... 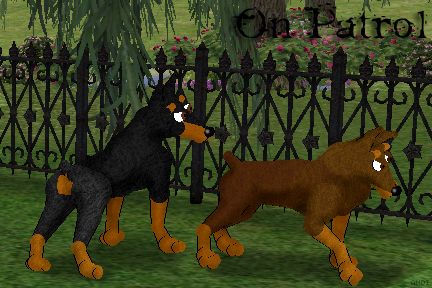 The perimeter is secure.  Two of my dobies on guard.  Oooh, they look so bad ass don't they? 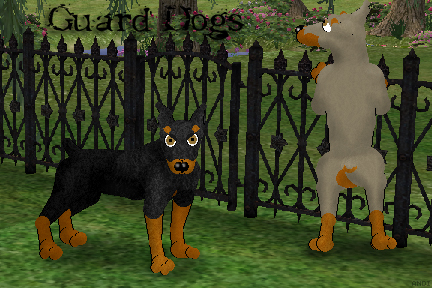 More guard dogs on duty.  Fallen looks so angry!  You wouldn't think about trespassing now would you?
The backgrounds for these pics were made by Andi of Cirrutopia.


Hybrids of the Apocalypse
(linked cuz it's big)

My apocalypse hybrids.  A smaller version of this was my sig for a while at Coming Soon.  This is the big version though.

Bah, I know it's too big for a sig.  But bite me, nobody's perfect.  Adam Duritz of Counting Crows and my doggy Rasta.  Mrrrow!  PKC Sig.

This was my sig for a while at the Coming Soon forum.  It's my dog Crow with the Laughing Man logo over his face!  That will make absolutely no sense to you unless you've seen the anime Ghost in the Shell: Stand Alone Complex.  But if you have seen it, you might get a kick out of this.  In case you can't tell, the words say "I thought what I'd do was, I'd pretend I was one of those deaf-mutes."  It's a quote from the book The Catcher in the Rye.  Oh, and I didn't draw that logo, someone else did, I just borrowed it.

I made this sig after I got my first three camps in the PKC.  Yeah I know it's big, but it was the first fancy sig I made with brushes and all that, so I got carried away.

Heh, so I went a bit nuts after I got my first champion.  I made these to pictures of her.  The second one has lyrics from the song she's named after.

Awww, Easter bunnies, how cute!  This was my sig for Easter.  More fun with brushes. 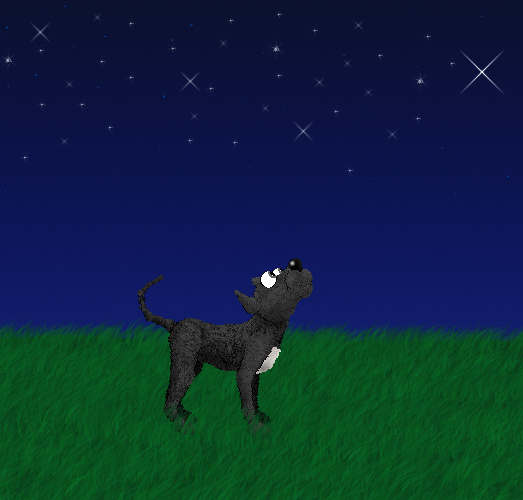 Okay so it's really simple, and there's way to much emptyish space.  But I made this pic right after I got Photoshop Elements, I was just messing with brushes and such and decided to save it. 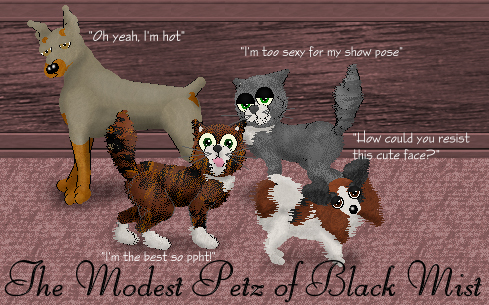 You can get some funny shots while trying to take show pics.  So I stuck a bunch of them together with funny captions.  My petz are oh so modest aren't they?


Join the Committee for the Liberation and Integration of Terrifying Organisms and their Rehabilitation Into Society!