Manen Wolves and Lynxes based on the Wolf's Rain characters

Well not long ago I got this crazy idea to hex wolves based on the characters from the anime Wolf's Rain.Ý I was inspired by Vickie's amazing files and I wanted to do something creative of my own with them.Ý I really love Wolf's Rain and it seemed fitting that if the characters from that series were petz they'd be Manen Wolves.Ý So, I hexed 'em!Ý I tried to get as close as I could with the colors.Ý I'm always frustrated by the limited colors in petz.Ý But anyway here are my wolves (and a few lynxes) based on Wolf's Rain!Ý Keep in mind that they are just based on the characters, I made some changes because of the limitations of my hexing skills and to the pack structure to fit a Manen Wolf and Lynx style pack.

By the way, in case you don't know, Wolf's Rain is an anime about a world in which wolves are thought to be extinct.Ý But actually they are alive and can disguise themselves as humans, and they are driven by a strong desire to find paradise.Ý The legend says that humans were created from wolves and at the end of the world the wolves will find paradise.Ý (That probably makes no sense if you've never seen it, but, oh well, I'm not very good and giving a quick synopsis.)

These are my personal petz and are not for adoption.

Kiba is a very passionate wolf.Ý He always knows what he wants and goes for it, no matter what.Ý He is very stubborn and proud, and this can sometimes get him into trouble.

Kiba was the easiest to hex, so I did him first.Ý Heh.Ý I think Kiba is the sexiest of the wolves in his human form.Ý I mean they're all cute, but Kiba is my favorite.Ý I don't care that it's only an illusion, these boys are yummy! 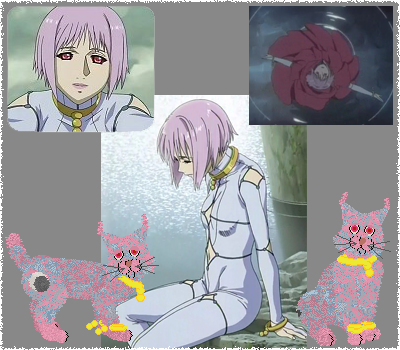 Cheza is very quite and gentle.Ý She adores the wolves and loves to be with them.Ý She is always kind and affectionate.Ý But at the same time she can be very mysterious and aloof.Ý All the wolves are drawn to her, especially Kiba.Ý But Tsume seems a bit mistrusting of her.Ý Because everyone looks to her for guidance she is sort of considered an unofficial alpha.

If you've seen Wolf's Rain, you may be wondering why I made the flower maiden a cat.Ý Well, I couldn't very well make her a human could I?Ý So I decided to just get creative and imagine what she would be like as a cat.Ý I really wanted to make her fur that beautiful pale lavender that her hair is, but of course petz doesn't have that color.Ý So I made her pink and blue mottled, just cuz I thought it looked cute.

Tsume's scar gave me a lot of trouble.Ý Cuz I first tried to make it out of paint ballzÝ x.xÝ Oy.Ý But I gave up and made it out of add ballz.Ý It looks much better that way then I ever could have made it with paint ballz.Ý It sometimes sticks out oddly since it's not completely flat, but most of the time it looks great.

Hige is very happy-go-lucky.Ý He is usually cheerful and doesn't let may things bother him.Ý Except lack of food, he hates that.Ý And if he's not chasing after food, he's chasing after females.Ý But Hige is generally very good-natured and always trying to cheer the others up.

Unlike the original Manen Wolf file, I made all my Wolf's Rain hexies' collars and bracelets actual clothes items.Ý I did this cuz for some reason when I tried to do Hige's collar I couldn't get it to look right as add ballz, so I tried it as clothes, and it worked.Ý So I just did the same for everyone else. 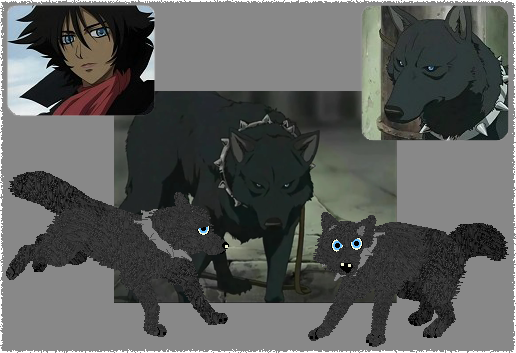 Blue is only half wolf and for a long time she didn't even know it.Ý Since she lived most of her life with humans she's a bit unsure about being in a wolf pack.Ý But she likes Hige and his clumsy but well meaning attempts to flirt with her seem to put her at ease.

I've wanted to hex a spiked collar for a long time.Ý And I finally got around to doing it for blue.Ý I'm very happy with the way it turned out.Ý It wasn't as hard as I thought it would be.Ý Add ballz aren't as scary as they seem at first! 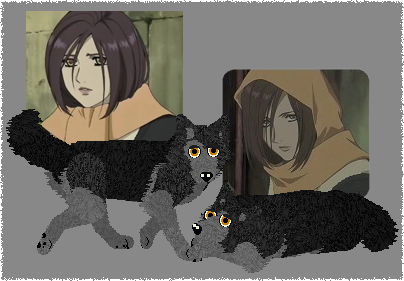 Cole is very self reliant and tough.Ý She has just recently joined the pack, so she isn't quite sure of her place yet.

Cole is actually a very minor character in the series, and you never even see her in wolf form.Ý But I liked her so I wanted to imagine what she might look like as a wolf and hex her.Ý So she now gets to be a part of the pack. 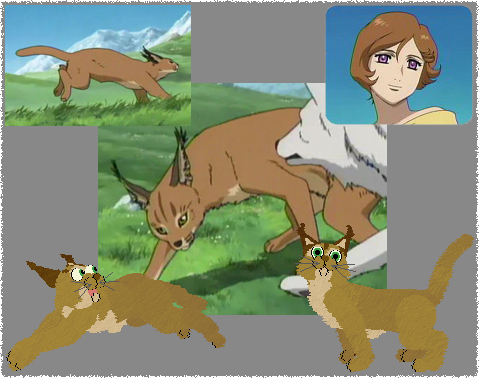 Myu is very playful.Ý She really likes the wolves, especially Kiba.Ý She seems to have a bit of a crush on him, even though they are different species.Ý Myu never seems to worry about anything, she just lives in the moment and enjoys having fun.

Myu is another minor character that isn't really part of the pack in the series.Ý But again I really liked her, so I added her to my pack.Ý I'd just like to state for the record that I hate moving cat ears!Ý They have way too many ballz!

As the youngest member of the pack, Toboe is still pretty much a puppy.Ý He is very timid and wants to please everybody.Ý He looks up to the older wolves, especially Tsume.Ý Tsume tries his best to act like he doesn't care about Toboe, but he really does.

I know Toboe is supposed to have four hoops on his bracelet, but I couldn't make more that two look right.Ý Maybe a better hexer than me could have, but oh well.Ý I think two looks good enough.

Note: Wolf's Rain, all charachers and images © BONES/ Toshihiro Kawamoto.
Vickie of Vickie's Petz Zoo created the Manen Wolf and Lynx files.Ý These hexies wouldn't have been posable without her amazing work!

So much for sanity.